The UPOE-800G provides a quick, safe and cost-effective 802.3bt PoE++ network solution for small businesses and enterprises. It is designed to perfectly upgrade an existing network infrastructure to 802.3bt PoE++ network system without replacing the existing Ethernet switches. It also enables centralization of the power supply and optimizes the installation and power management of remote network devices. 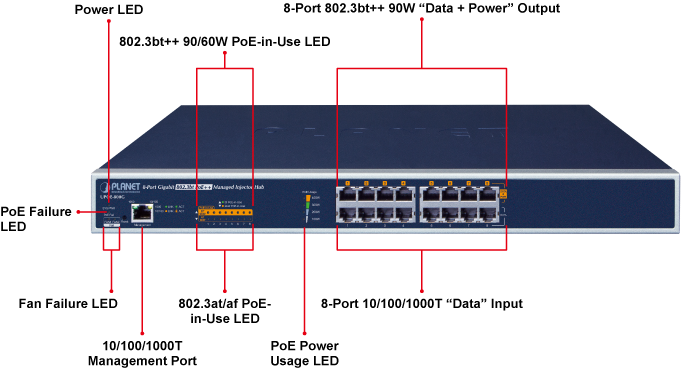 As the UPOE-800G adopts the IEEE 802.bt PoE++ standard and PoH technology, it is capable to source up to 95 watts of power by using all the four pairs of standard Cat5e/6 Ethernet cabling to deliver power and full-speed data to each remote PoE compliant powered device (PD). It possesses triple amount of power capability than the conventional 802.3at PoE+ and is an ideal solution to satisfy the growing demand for higher power consuming network PDs, such as: 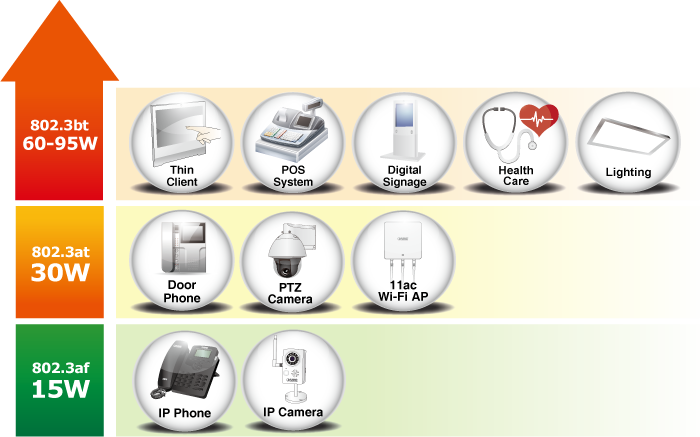 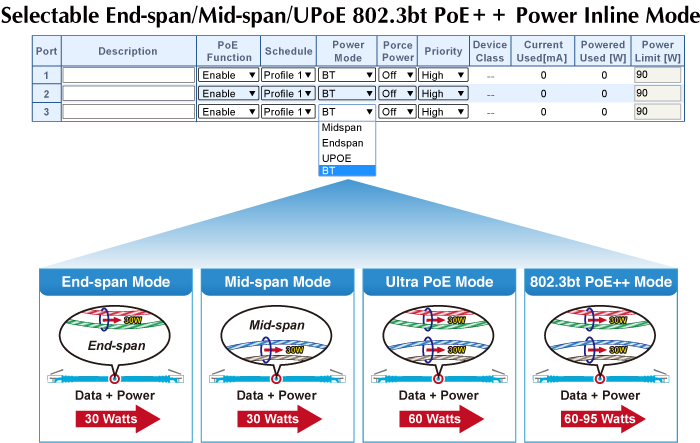 The UPOE-800G is installed between a regular Ethernet Switch and the PDs. There are totally 16 RJ45 STP ports on the front panel of the UPOE-800G, of which the 8 ports are on the lower stack functioned as “Data input” while the other 8 ports are on the upper stack functioned as “PoE (Data and Power) output“. Both power and data are transferred simultaneously over the UTP cables to various 802.3bt/at PDs without affecting the existing network performance and functions. 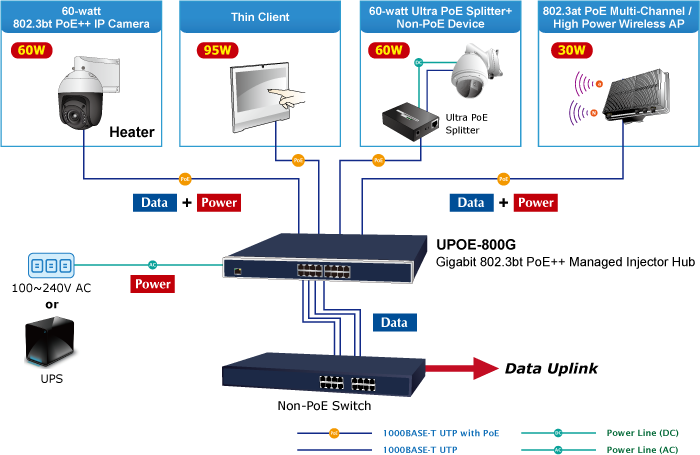 With data and Power over Ethernet from one unit, the UPOE-800G can reduce power cable deployment and eliminate the need for dedicated electrical outlets on the wall, ceiling or any unreachable place.

To efficiently manage the powered devices, the UPOE-800G provides remote Web management interface in which administrators can control the system and PoE functions for powered devices. It can automatically detect the power status of each port and show messages on its Web management interface. These features also provide users with a cost-effective way to manage the device via Internet whenever they are at work or at home. 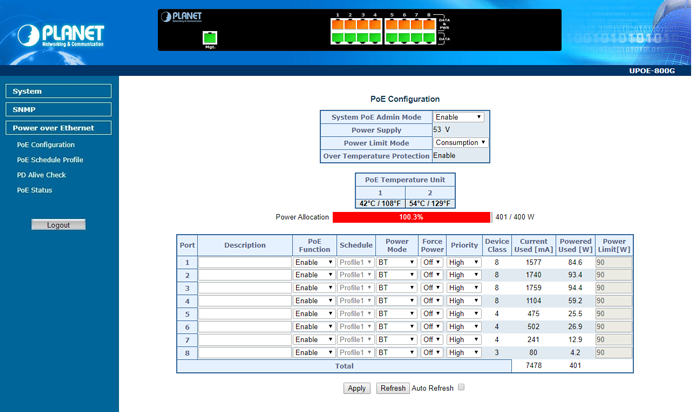 As it is the managed PoE++ Injector Hub for VoIP, wireless and surveillance networks, the UPOE-800G features the following special PoE management functions:

PLANET’s Managed PoE products adopt not only Power over Ethernet technology, but also automated PD monitoring and real-time PoE status. The UPOE-800G can be configured to monitor connected PD’s status in real time via ping action through the uplinked Ethernet switch. Once the PD stops working and responding, the UPOE-800G will recycle the PoE port power and bring the PD back to work. It also will greatly enhance the network reliability in that the PoE port will reset the PD power, thus reducing administrator’s management burden.

Under the trend of energy saving worldwide and contributing to environmental protection on the Earth, the UPOE-800G can effectively control the power supply besides its capability of giving high watts power. The built-in “PoE schedule” function helps you to enable or disable PoE power feeding for each PoE port during specified time intervals and it is a powerful function to help SMBs or enterprises save power and money. It also increases security by powering off PDs that should not be in use during non-business hours. 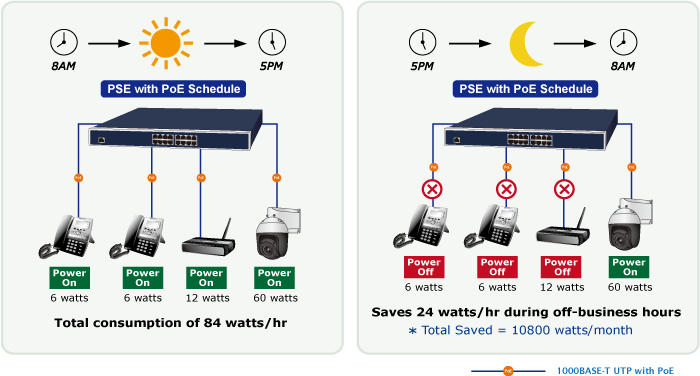 The UPOE-800G allows each of the connected PoE IP cameras or PoE wireless access points to reboot at a specific time each week. Therefore, it will reduce the chance of IP camera or AP crash resulting from buffer overflow.

Via the power usage chart in the web management interface, the UPOE-800G enables the administrator to monitor the status of the power usage of the connected PDs in real time.

With up to 95-watt PoE output capability, the UPOE-800G can extend much longer distance by using PLANET PoE Extender for powering up the PoE PD which can be installed over more than 100 meters away. By daisy-chaining multiple PLANET PoE Extenders, it offers the great flexibility of doubling, tripling or quadrupling the distance of PoE network.

The UPOE-800G features a low noise design and an effective ventilation system. It supports the smart fan technology that automatically controls the speed of the built-in fan to reduce noise and maintain the temperature of the 802.3bt PoE++ Managed Injector Hub for optimal power output capability. The UPOE-800G is able to operate reliably, stably and quietly in any environment without affecting its performance.

Gigabit Ultra PoE and PoE+ Network Deployment
The UPOE-800G provides the easiest way to power your Ethernet devices such as IP camera on the ceiling and the wireless access point installed on the top of the building. With 8 10/100/1000BASE-T Gigabit Ethernet ports, the UPOE-800G supports full 54V DC power for any remote 60W and IEEE 802.3af/IEEE 802.3at powered device (PD).

To control the power system of your networking devices, the UPOE-800G can directly co-work with network devices such as PoE IP phone to build VoIP telephony network in the office. The Ultra PoE hub can be directly connected to any third-party IEEE 802.3af/802.3at compliant devices installed within 100 meters. Furthermore, the UPOE-800G can extend much longer distance by using PLANET PoE Extender for powering up the PoE PD which can be installed over more than 100 meters away. 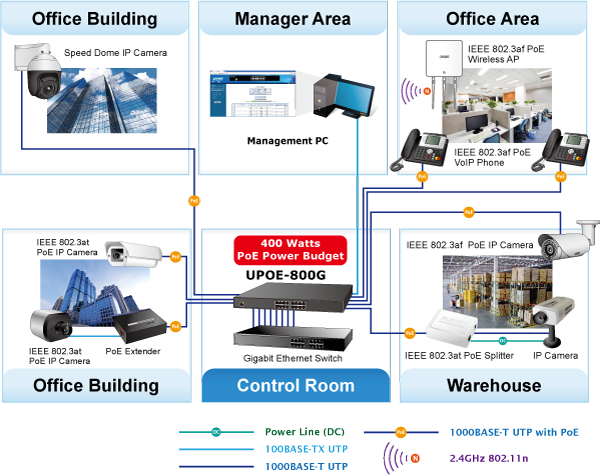 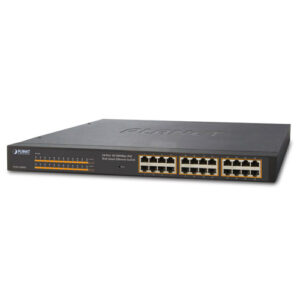 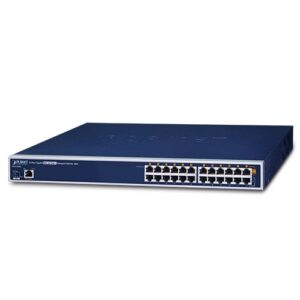 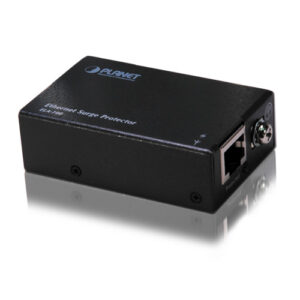 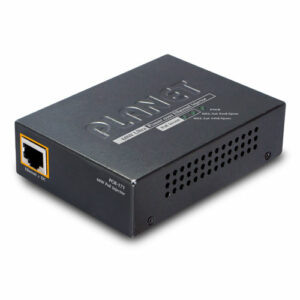 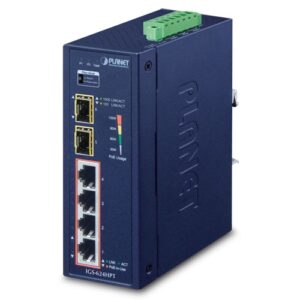 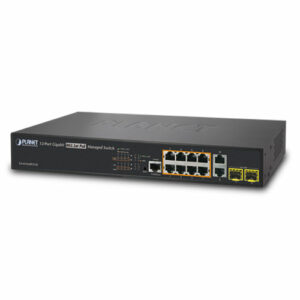 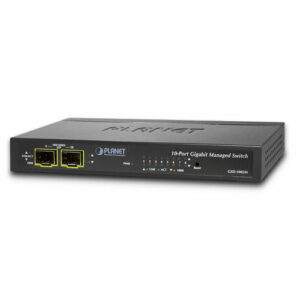